Online services meet great support and easy banking with Thompson in charge  Napa, Calif. – Redwood Credit Union (RCU) has promoted Deirdre Thompson to senior vice president of virtual service delivery. In her new role, Thompson is responsible for making sure members receive the same level of passionate service digitally as they do in person.Thompson joined RCU in 2009 with more than ten years of experience in finance and tech. She formerly worked as senior vice president and technology service delivery 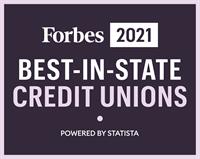 Consumer Survey Ranks RCU Second in California  Santa Rosa, Calif. – For the second year in a row, Redwood Credit Union (RCU) has been recognized as a top credit union in California in Forbes’ list of America’s Best Credit Unions in Each State.Forbes and Statista, who conducted the research, based these rankings on an independent survey of approximately 25,000 U.S. consumers who were asked about their banking relationships as well as their satisfaction in the categories of trust, digital services,